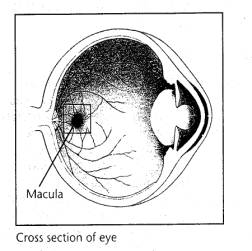 The "dry" type of AMD occurs when retinal aging limits visual performance. This type accounts for 90% of the disease and does not cause a total loss of central vision. The "wet" form, by contrast, involves abnormal blood vessel development that damages the macula. This type is often more visually threatening, and occurs in only 10% of AMD patients but causes 90% of the disease's severe visual loss.

The biggest risk factor for development of this problem is simply getting older and your genetic make-up. It usually hits after age 50, and, by the time you're 75, about 15 percent of all people have it. but there are certain things that help to reduce the incidence:

Smoking: A study published in the July 2007 issue of Archives of Ophthalmology found that current smokers are four times more likely to develop this eye problem than nonsmokers. This is yet another of many compelling reasons not to smoke. So if you do, PLEASE QUIT !!

Nutrition: The Age Related Eye Disease Study (AREDS) demonstrated that dietary supplementation of antioxidants and zinc reduces the progression from intermediate to advanced dry AMD by 25%, and the chance of further visual loss by 19%. A review of these results is available at https://www.nei.nih.gov/amd.

Steroid therapy, often involving injection into the eye, may be used by itself or in combination with other AMD treatments to reduce retinal inflammation involved in new blood vessel growth of wet AMD.

Implantable telescope: In July 2010 the FDA approved a tiny implanted intraocular device that magnifies images onto the retina to improve central vision damaged by AMD or Stargardt's macular dystrophy. The Implantable Miniature Telescope (IMT) from VisionCare Ophthalmic Technologies Inc. (Saratoga, California) magnifies the overall image, while reducing the relative size of the central blind spot caused by central retinal degeneration. CentraSight is the patient care program managing the IMT.  It includes not only the surgery to implant the telescope, but also an extensive training program to improve the chance of success.  For more information see www.centrasight.com.